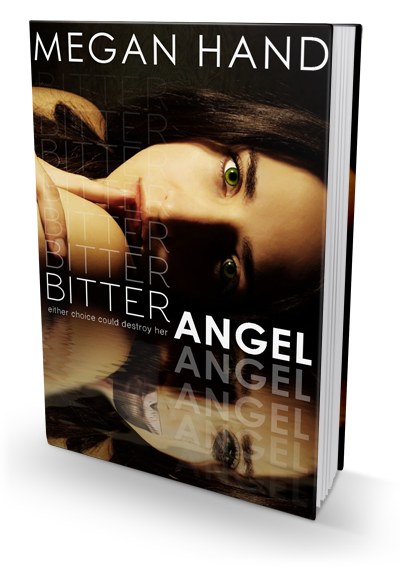 Torn between two realities.
A choice that will mean life or death.
But she won’t know anything… until she wakes up.

College sophomore, Lila Spencer lived Friday night twice. She doesn’t know how or why, just that she did. As if she split in half and went in two different directions.

Out clubbing with her friends, Heather and Nilah, the girls rock it out and party hard. What begins as an innocent night will lead to a deadly fight for their lives, and Lila might be their only chance for survival.

In bed with her boyfriend, Jay, Lila is safe and warm as she drifts to sleep in the arms of the man she loves. Until she is sucked into a horrifying nightmare of her friends' deaths.

As the sunlight warms her face on Saturday morning, the two scenarios collide. But there can be only one outcome. Will she wake up in her warm bed with Jay by her side, devastated and grieving for her friends? Or was she there to save them?

The answer is just the beginning.

Bitter Angel was a very mixed bag for me. The first part would easily get a 4 stars; it was intriguing and exciting, it even had my heart pounding with pure adrenaline. Unfortunately the second part left a little too much to be desired, garnering only a 2 if rated separately.

Let’s start at the beginning: After Lila decides to go out with her two best friends at a club, she never thought things would turn into a life or death situation involving gang rapes and abduction. What’s peculiar though, is she also remembers what happens if she had stayed home with her boyfriend, and that scenario was equally terrible. Although obviously not “realistic”, I found this to be very interesting. The abduction was a terrifying situation; all too real and with tons of intensity. The other reality, staying home and leaving her friends to themselves, evened this out with a sweet romantic night, but with its own consequence in the end. The action does plummet after these initial sequences, though, when Lila wakes up for her redo and the story switches gears. Mostly this next part contains exhausting inner dialogue, a lot of fidgeting, and even an instance of garbage eating.

Yes. Garbage eating. *shakes head still in disbelief* So Lila is spying on this guy, right, hiding out in a back alley, when hunger hits. It has been SO long – like, 8 hours!! – since she last ate that she can not fathom going another minute in hunger, so she jumps into the dumpster and searches through trash bags until she finds Chinese food… and eats it!

I think my barf just barfed!

Eeeh yeah no shit it’s smelly! Even if it was only a day old (which I very much doubt seeing as even the buildings on this street are rotting), it was likely amongst used condoms and dirty diapers. No one normal would resort to this unless they were seriously starving to death and trapped. Not someone who ate lunch the very same day! On the plus side, it has brought on random giggling fits for the past 2 days whenever I’m reminded of it. Though I doubt this was the intended reaction. Even ignoring the hobo habits, Lila doesn’t have the most common sense in all of this ordeal, diminishing the tension of the story greatly. It’s hard to be scared for someone who puts themselves in their own messes. It comes to no surprise that I’m not this girl’s biggest fan, however I can’t say I disliked her either. She does prove her strength and determination more than once which redeems her faults a little. Like I said: a mixed bag!

The plot itself veers away from the expected traumatic side of this story line and instead focuses on bringing justice down on sickening evil. I was both intrigued and, I admit, a little disappointed by this – I do thrive on those traumatic psychological thrillers – but it was still a refreshing change of direction for a story that could easily have been another same ol’. I was horrified yet completely immersed when we learn of what these people have been doing on a regular basis. Most of the horror takes place at the beginning of this book, but we get a great climactic ending that brings back a little of the excitement I was hoping would keep throughout.

While I have obvious complaints about this novel, I can’t ignore the fact that I was holding my breath during the first part, drowning in Lila’s fear and truly feeling her heart breaking in guilt and grief. Megan clearly excels at writing suspense and I will be watching for more from her! 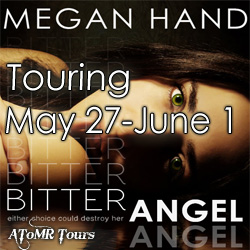 Giveaway
Thanks for Megan Hand and AToMR Tours, you can enter to win your own copy of Bitter Angel and a 50$ gift card!